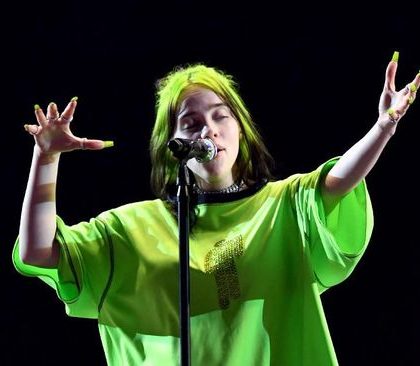 The name Billie Eilish has become increasingly popular in the US and international music scene since releasing her debut single, “Ocean Eyes”. No doubt, the singer who was born December 18, 2001, is the second nominee after Lizzo who was nominated at the 62nd Grammy Award this year. Billie Eilish Pirate Baird O’Connell is the full name given by Ellish’s parents who are actors and musicians. so, do not be surprised if the singer who was only 18 years old showed a decreased talent from both parents.

Ellish’s parents, Maggie Baird and Patrick O’Connell live and raise Ellish in Highland Park, Los Angeles and have Irish and Scottish ancestry. At the age of 11, Eilish began writing and singing his own songs.

The song that started viral

In October 2015, Eilish recorded the song “Ocean Eyes”, originally written by Finneas for his band and sent it to the dance teacher who helped choreograph the dance for the song. “Ocean Eyes” was released as Eilish’s debut single on SoundCloud in 2016. A music video was released on March 24, 2016, and the Eilish video dancing to the song was released on November 22, 2016. “Ocean Eyes” was re-released worldwide through the Darkroom label and Interscope Records on 18 November 2016 and received positive reviews. “This song is pure pop; a ballad about longing with an ex. I can imagine it being a big hit,” said Chris DeVille of Stereogum. On January 14, 2017, Eilish released an EP with four remixes “Ocean Eyes”.

One of the most Grammy Award 62nd nominees

After the successful remix of “Ocean Eyes”, Eilish released the single “Bellyache” on February 24, 2017. In February 2018, Eilish embarked on the Where’s My Mind Tour which ended in April 2018. When We All Fall Asleep, Where Do We Go? released on March 29, 2019, along with the single Bad Guy. The album reached number 1 on the Billboard 200 and made Eilish the first artist born in the 2000s to have the number one album in the United States.

Regarding herself, Eilish said: I am truly different from many people, and I try to be like that. I don’t like to follow the rules at all. If someone starts wearing something in a certain way, I will wear the opposite. I always wear what I want and always say what I want to say. I’m super, super out there. I like to be remembered, so I like to look memorable. I think I have proven to people that I am more important than they think. I am somewhat intimidating, so people will listen. I’m kind of scary. Many people are just afraid of me. I have a bitch’s face.

“Lizzo, Cus I Love You”
Posted in Articles ||